One down, two more to go. I booked three days at Nuthouse Recording Studio to finish the bulk of the record and so far it was very productive. Today we adjusted the bass lines to ‘Between The Sun and Candlelight’ which we will return to tomorrow. It’s a rocking tune that I hope to put some interesting and unusual guitar work on.

After recording several versions of ‘Riot’, we almost returned to the original demo I recorded months previously. It goes to show that sometimes when you are not thinking, you sound better. The final take today just nipped it at the post. I played it on a Yamaha guitar (same type used by Elliott Smith) and it carried the melody a lot better than my Martin (Shock. Horror!) It’s a slower, lyrically heavy Nick Drake-ish track that I think is an indicator of where Supersmall may eventually veer towards more in the future. It has no drums but ‘Siren’, another song that falls into the ‘future Supersmall’ category does. This was also worked on today. Daniela’s drums create an unusual haunting atmosphere not too different to ‘This Grenade Will Love You”. It’s the most complicated guitar part i’ve ever written although to hear it you may not think so. The guitar is in C-G-E-G-C-C tuning which allows for some interesting chording.

‘A Better Life’ was completed except for vocals as my voice just wasn’t cutting it today. I got to use a ’59 Jazzmaster  for a ‘Shins/Beatles-esque’ riff throughout. A Rickenbacker 360 gave it an R.E.M sound on the ‘weird change part’. 😉

Both Tom and I laid down some guitar parts for ‘Home’. Honestly I think it’s done but Jeremy, a session musician who is arriving on Sunday may add some piano.

Tomorrow we tackle ‘Silent Moon’, a favorite and very personal song that was a true co-write. Also, ‘Free from Harm’ . A black sheep if ever there was one. 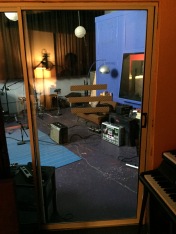 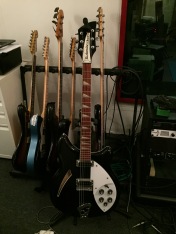 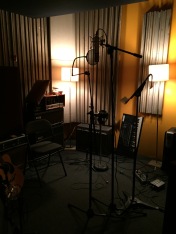 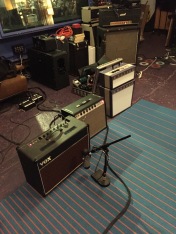