I spent three days last week at the studio mixing the record now that all the recording has been done. It’s a long, slow but interesting process (of which the producer does 99.99% of the work – credit where it.s due). During the mixing of ‘Riot’ I felt it needed a guitar solo and was able to record it on what is now my latest obsession, a Gibson Memphis ES-330. We removed some backing vocals on ‘Free From Harm’ (also known as the yacht rock song) and made some minor adjustments here and there but it was mostly re-amping previous recordings. It sounded great and I’m sitting with them for a week or so to let them sink in. Tomorrow I return to Moon Lab Studios to finish the vocals on ‘Take The Day Off’ and then they’ll all be sent to get mastered and viola! We have our next record/first album. Much respect to Tom our producer, he’s an infinite supply of patience and energy. After touring the country opening for Neko Case, his first gig back was mixing our indie rock record. Daniela couldn’t make the sessions herself but hey, that’s what WhatsApp is for 😉

Below are some random pics of the days spent mixing. 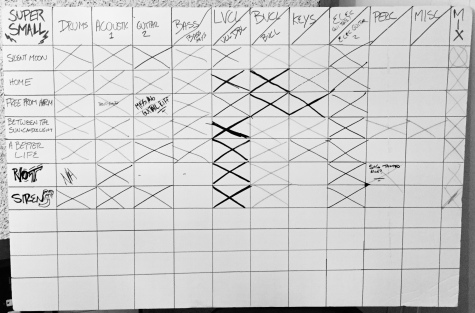 Progress Board (Tom Drew The Mermaid)

Indie Rock Hair Not Working Out.

Sunset On Way To Sparrows Tavern.