Well this update is a little on the late side, a full week late in fact. After recording I had a hectic week and tonight is the only chance I’ve had to sit down and write. Anyway, day 3…

Jeremy, a piano player friend of our Producer Tom lives close to me in Queens, so I picked him up in the car early Sunday morning and we drove to the studio together. He’s from Atlanta, Georgia but spent a lot of time in Athens. I of course nerded out being the huge R.E.M. fan that I am. Yes he met them, yes they’re all awesome.

As soon as we arrived we began putting keyboards on almost all the songs so we could return during the mixing stage and edit what we need. First up was ‘Home’, a fast-moving tune not unlike ‘This Other World’, then some Rhodes Organ was put on what is becoming my favorite tune ‘A Better Life’ (also known as the Belle and Sebastian song).

Some subtle strings were then laid down over the bridge of ‘Free From Harm’. This song is the one we’ve been referring to as ‘Yacht Rock’ due to its early 80’s, fun melodic vibe if you’re been looking at our tweets and Instagrams.

‘Silent Moon’ got some beautiful touches from the grand piano and a little Wurlitzer too. Like cheese, the Wurlitzer goes good on everything. Background strings also were used to fill it out a little.

‘Between The Sun and Candlelight’ got some grand piano chording which really helped the choruses. There is a lot of guitar on this track and it’s the one song that has morphed into something very different from what it started out as. It’s always interesting to see that happen.

‘Siren’ needs little or nothing but we put a faint background fill throughout which really suits it. This is a very complicated guitar part but to be honest it’s Daniela’s drumming which really rounds out the sound.

‘Riot’ which is just me on guitar remained untouched. I done many takes of this song and in some my voice in stronger while the guitar is weak and then in others the guitar is strong and my voice is wreak. I think this is to do with the fact that the song itself has changed constantly in tempo, key and lyrics. To be honest, I was still tweaking it until about two weeks before recording. I’m very proud of it, the version we done is as close as I could get to what was in my head although the tempo picks up a little at the end. Click Track? Yeah we don’t use that.

This Wednesday night we have a trumpet player coming in for the choruses of ‘A Better Life’ and then we need to figure if ‘Riot’ actually needs anything. Cello? Violin? Maybe it’s fine the way it is. Jeremy left early and I stayed back to give the songs a final listen and pack up. On the way home I stopped off at an Irish bar just a mile or so south of the GWB that I had passed on previous nights. something about it intrigued me, it was just a dive in the middle of nowhere really. I parked the car, walked inside and Like any local, everyone turned around and greeted me. I had a beer and watched part of a baseball game along with everyone else. It felt good to have all the work behind me. It took two years to get this Album together, many songs written and discarded, but we have Eight songs that we are very proud of and I’m looking forward to promoting it and playing live again.

Listening back to the rough takes it’s hard to imagine that Daniela was seven months pregnant while she was banging on the drums. She really rocks out on ‘Between The Sun And Candlelight’ so keep that in mind when you hear it.

I worked on a new song this morning and felt good about it, maybe it’s gonna be the first song on the next record 😉 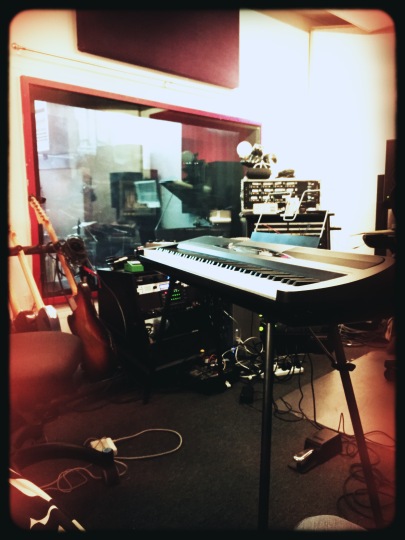 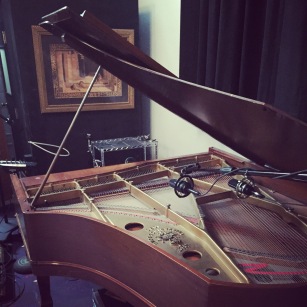